One of the many icons of the Eternal City, the Fountain di Trevi in Rome dates back to 19 BC and is the terminus of what was then called the Aqua Virgo aqueduct.

Measuring 20 meters in width by 26 meters in height, the fountain is also the ancient city’s largest and pumped in some 100,000 m3 of fresh water a day during the Empire from a spring approximately 20km away from the city itself!

Part of a network of aqueducts the Empire used to meet its daily water needs, the Fountain di Trevi’s lineage is almost as long as the Roman civilization. The Fountain di Trevi derives its name from the landmark’s location as the meeting point of three streets or “Tre vie.”

The facade that we are familiar with today dates back to 1762 and is the last of three versions of the fountain, the first commissioned by Pope Nicholas V (13 November 1397 – 24 March 1455).

Notably, though it is a papally commissioned work, the fountain portrays the Greek pagan god of the sea Oceanus taming the waters in a symbolic reference to the ancient Roman aqueduct and the civilization’s amazing ability to control and manipulate water. 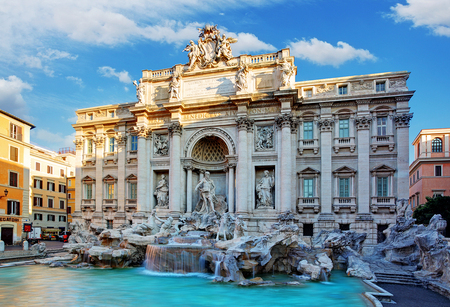 Interestingly enough, for such an ancient landmark from antiquity and the later renaissance, there is one persistent modern myth that hovers around the Fountain di Trevi.

Derived from the 1954 film “Three Coins in the Fountain,” the practice of throwing one to three coins in the fountain is neither ancient nor traditional but, instead, somewhat manufactured.

One coin symbolizes your eventual return to the city while two coins mean you will find an Italian lover and, three, naturally, that you will marry that person.

The Fountain di Trevi collects some million euros worth of coins each year from visitors to Rome looking for love and this money is collected and used to support charitable causes.

One myth that tourists might want to be aware of before they are overcome with the joie de vivre that comes from visiting Rome: If you decide to jump into the Fountain di Trevi a la the film La Dolce Vita, then expect to pay a €500 fine.

While this doesn’t deter everyone, it should keep most people from taking a leap into one of the world’s finest examples of architecture, art, and ancient hydraulic engineering.