The Tapestries in The Vatican

Tapestries were a principal aspect of the ostentatious ‘magnificence’ used during the Renaissance by powerful religious and secular rulers to broadcast their wealth and their might to the public. It highlights the finest tapestry cycles of the age as one of the greatest achievements of Renaissance Art.

Examples from many of the most important surviving set—which still dazzle today as they did a hundred years ago in the palaces and cathedrals of Europe—illustrate the contribution that the medium made to the art, liturgy, and propaganda of the time.

In 1512 After Michelangelo had completed the Sistine Chapel in the Vatican ceiling, Pope Leo X wanted to leave his mark on the chapel, but Michelangelo, Pietro Perugino, Sandro Botticelli and Domenico Ghirlandaio had already painted every surface.

Pope Leo chose the young and rising artist star, Raphael, to create and commissioned in 1515 ten designs for a special set of tapestries for the chapel’s lower walls, whose panels had already been adorned with “trompe l’oeil” drapery. The tapestries were woven in the Brussels
workshop of Pieter van Aelst. Their effect not only on the pre-existing paintings but also on the spoken and special liturgical ceremonies that took place in the Sistine Chapel. These sets of tapestries also occupied a prominent position above the nave in Reims Cathedral at the coronation of Louis XIV in 1654.

At the papal court, the tapestries woven for Popes Leo X and Clement VII from cartoons by Raphael and his workshop continued to play a major part in the articulation of the religious calendar in the Sistine Chapel and in other Vatican
ceremonies. 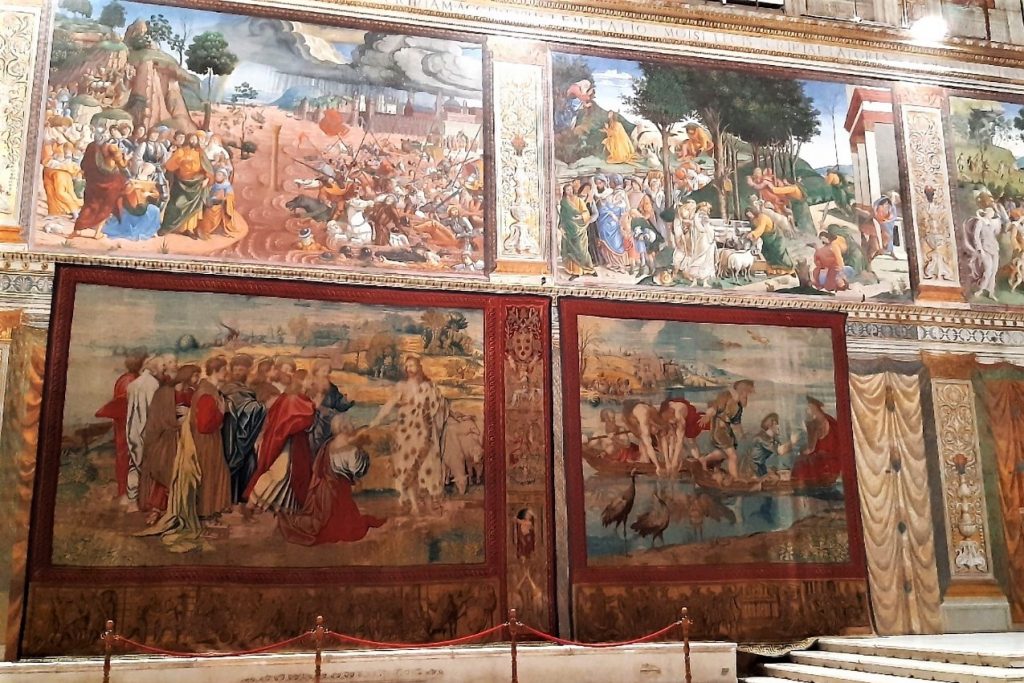