The Story Behind Raphael’s Masterpiece ‘The School of Athens’

It is hard to imagine that the Italian Renaissance, an age of new ideas and enlightenment, took most of its inspiration from the world of Greek and Roman antiquity.

Searching for a return to the halcyon days of the past, artists like Raphael were enamored with the world of Rome.

The philosophers of ancient Greece, and the spirits that ruled prior to the middle ages and the new Christian norm. Nowhere is this sentiment more firmly expressed than in Raphael’s masterpiece The School of Athens.

A fantastical depiction of the greatest thinkers from antiquity until his present day, Raphael’s The School of Athens is as much as who’s who of history as it is a piece of art.

Containing within it the knowledge of the ages, and enough trivia to make a museum director’s head spin, this picture defines the phrase “there’s more than meets the eye” when it comes to what’s on the canvas.

In the foreground and in the direct visual center of the picture are the figures of Plato and Aristotle with Plato represented by the elderly figure and Aristotle being the other man. Extremely influential in the development of Greek philosophy, Platonic ideas and Aristotelian logic also greatly influenced early Christian thinkers as well.

Plato’s finger points up to the heavens in what can be understood as a symbolic gesture that encapsulates the philosopher’s position in society as making sense of the heavens themselves. 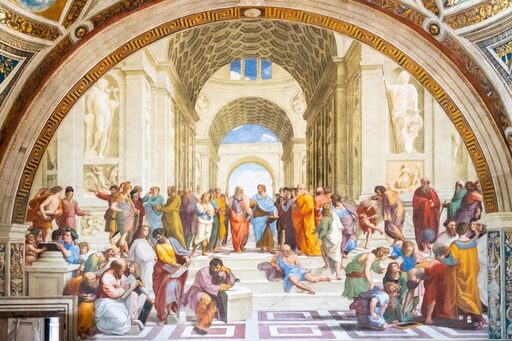 This is echoed in the actions of Aristotle whose hands are towards the ground, indicative of his reality-based approach to the world and its relationships.

In other words, Plato’s emphasis on concepts and ideas, as opposed to Aristotle’s focus on the immediate and knowable, are diagrammed in their actions.

The famous mathematician Pythagoras joins them, hunched over a book and scribbling notes. Famous for the theorem that shares his name, Pythagoras also postulated about the movement of the planets and argued that their motions followed the logic of mathematics.

Holding a terrestrial sphere is the thinker Ptolemy while his companion with a celestial sphere is Zoroaster.

Their theories on the movements of the planets and stars greatly influenced the way Renaissance thinkers conceived of the world around them and their place in it. Interestingly, Raphael decided to insert himself into this debate.

Standing in front of Ptolemy and to the side of Zoroaster, Raphael is looking at the viewer of the painting as if to signal that he is part of the debate or even the greater pantheon on display in the picture itself.