The Statues of the Trevi Fountain:

Meaning and Glory of Rome

An inescapable part of the Rome experience, the Fountain di Trevi’s awe-inspiring beauty and impressive history make it a must-see attraction in a city overflowing with culture and things to do.

While many of the famous myths about the Trevi Fountain are more modern in nature, such as the tossing of the three coins in pursuit of love, the structure itself is actually the last of three iterations of a fountain first commissioned during the renaissance to be built on an ancient Roman structure called the Aqua Virgo first constructed by Agrippa in 19 BC.

One among many fountains in 4th century Rome, the original was a utilitarian project designed to bring water to the Roman baths.

As you can imagine, it was not as much of a tourist attraction in 1629 when Pope Urban VIII instructed the famous Bernini to add “drama” to the otherwise pedestrian design. The design we see today is actually the byproduct of forced-by-fate collaboration between Nicola Salvi, working from Bernini, and, later, Giuseppe Pannini who completed the project of Fountain di Trevi in 1765 after Salvi’s passing. 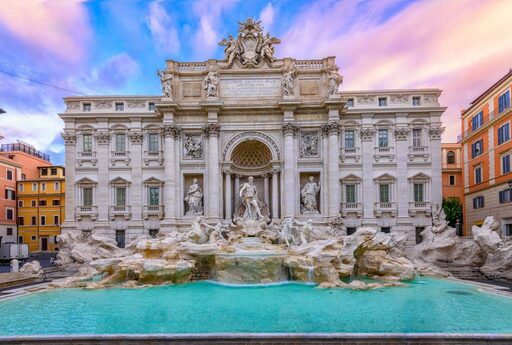 An embodiment of Roman power and the Empire’s ability to control water, the theme of the fountain is, in fact, “Taming of the Waters.”

Covered in a facade of Travertine limestone, the statues around the fountain derive from pagan Roman themes and are made out of Carrara white marble.

The centerpiece of the statues is often mistaken for Neptune but it is actually a depiction of the Greek god of the sea, Oceanus.

An easy way to distinguish between these two deities is that Neptune is often shown holding a trident and riding a dolphin while Oceanus is accompanied by sea-horses and Tritons (half men and half mermen) as depicted in the Fountain di Trevi.

The other two statues are Abundance and Health, to the left and right of the arch respectively. Abundance is depicted holding a horn over a vase on its side. Above Abundance is a relief of Agrippa instructing men on how to build the aqueduct in 19 BC.

Health is shown wearing a wreath crown and holding a cup in her hand as a snake drinks from it with a relief above showing a virgin telling a group of soldiers about the Aqua Virgo.

Directly above these three major statues, you see four minor statues showing a horn for an Abundance of Fruit, ears of wheat for Fertility of Crops, a cup of grapes for the Products of Autumn, and the last draped in flowers depicting the Joy of the Gardens.