The Statue of Laocoon and His Sons:

A Marble Masterpiece found in 1506

The Laocoon, the monumental sculptural group by Baccio Bandinelli is a copy of the famous marble sculpture from the late Hellenistic age discovered in Rome on 14 January 1506 in the vineyard of Felice de Fredis near the Baths if Titus on the Esquiline Hill. Baccio sculptured this copy utilizing three blocks of marble. He decorated the front of the pedestal with a naturalistic parchment showing traces of having previously been folded, and decorated the side with the emblem of Clement VII in relief: a transparent sphere traversed by a ray of sun that burns a tree beyond it, accompanied by the motto Candor illaesus.

This project was suspended at the death of Pope Leo X, but the sculptor resumed work on it in 1523 with the electional of Pope Clement VII, the former Cardinal Giulio de’Medici. In 1525 the sculpture was completed. Enthusiastic at the result, the pope decided to send it to Florence, to Palazzo Medici, where Vasari saw it at the head of the second courtyard. It was then moved to the Casino di San Marco, from where it entered the Galleria with the legacy of Cardinal Carlo, probably in 1671. It was restored after being damaged in 1762 by the heat caused by a fire in the Galleria and the collapse of the nearby gate to the terrace. 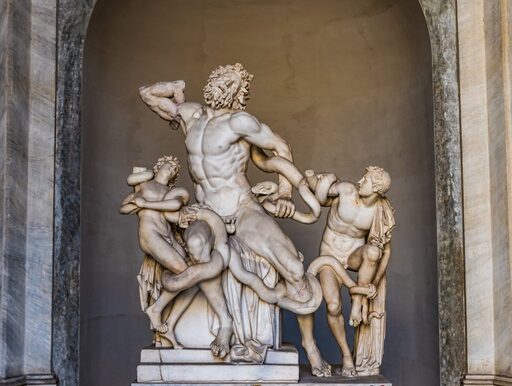