A project commissioned by Pope Innocent X to beautify what was then one of Rome’s most squalid neighborhoods, the Four Rivers Fountain is one among many but it is singularly spectacular in its own right.

Notable for its masterful combination of antiquity and the baroque, the Four Rivers Fountain is a testament to Rome’s history as well as its influence on the wider world. Architect Gianlorenzo Bernini designed the fountain after an interesting intervention by the pope’s cousin, Prince Niccolo Ludovisi.

Innocent X wanted to distinguish himself from his somewhat profligate predecessor and one way to do this was to go in a different direction in terms of commissioned public works. While Bernini was well known, he was not in favor with the papal court at the time.

Ludovisi snuck in Bernini’s model for the future Four Rivers Fountain of Rome and, though the pope remarked that it would be the most expensive design by far, he was struck by the majesty and scope of the design. The acceptance of Bernini’s design put him back into papal favor despite his relationship with the previous pontiff and gifted Rome with one of its most talented artists in the process.

Drawing in disparate elements into a collective whole, the Four Rivers Fountain features at its center an Egyptian obelisk from the Circus Maximus inscribed with tributes to Emperor Domitian as well as Vespasian and Titus. Continuing this pseudo-pagan theme (an interesting scheme if any for a papal commission), the obelisk is flanked by four river gods. 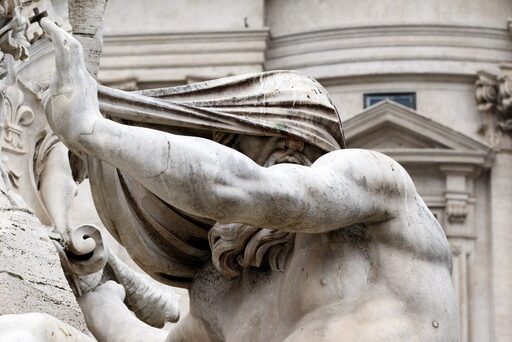 Designed in stunning relief with symbolic references to their nature and anecdotal knowledge of the rivers at the time, each one of the four represents a corner of the world to which Rome’s influence has spread. The Danube, being closest to Rome, is touching the papal arms while the Nile, Ganges, and Rio de la Plata evidence themselves in other ways.

Of particular note is the river god representing the Nile, sculpted by Bernini pupil Giacomo Antonio Fancelli. A native of Rome himself, Fancelli himself is featured in the sculpture as the representative for the Nile though his face is veiled.

The reason behind this is that, at the time, the source of the Nile’s waters was unknown thus the identity of this river god equally mysterious. Between the Nile sculpture and the Ganges is a lion, an animal that symbolically links the two continents together.