The Humors (Comedy) and Their Meaning Applied to Venetian Carnival Masks

The Venetian masks often associated with the Carnival of Venice in Venice, Italy, have a longer cultural history than many people know. Derived from the “art of comedy” or Commedia dell’Arte, these iconic masks each symbolize a different kind of character archetype or situation.

Used to comment on political situations to daily life, these comedies as they were called introduced stock characters and scenarios that endure in popular culture to this day.

We all know the jester, the hero, the adventurer, and the romantic interest, but few of us know that the masks of Venice have a history tied intimately to the development of these concepts.

Best represented by the arlecchino mask, the comic relief in Commedia dell’Arte was often depicted as a nimble, energetic, if sometimes bumbling, servant. Rarely ill-intentioned and typically the instigator of movement and action on the stage, the arlecchino typecast is found in almost every successful comedy on television or screen today. You can often distinguish between this character and other comedic archetypes by their dynamic movement. The arlecchino will bound where others would walk and will do acrobatic stunts to drive home the exaggerated ridiculousness of the action on stage. 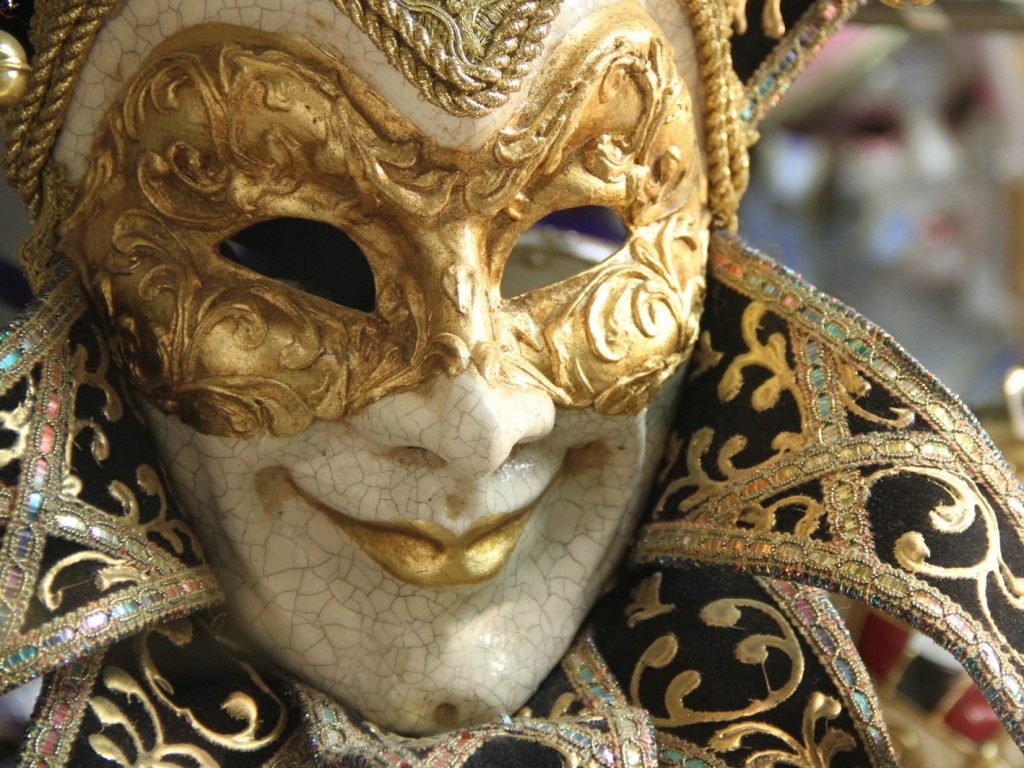 The money-grubbing villain of the comedy, the brighella is often seen along with his hapless servant the arlecchino. Typically portrayed as a middle-class trader or inn-keeper, the brighella’s greed and lusty nature are denoted by the baggy clothing and green colors that are often part of his costume ensemble. Typically the Brighella’s nefarious schemes or plans fail due to his own incompetence or the collective incompetence of himself and his servants.

A smart man of middling stature, the burratino is rarely a servant and is typically a good-natured middle-class business person or otherwise independent individual. One very famous example of the burratino archetype is found in the story of Pinocchio.

Another servant character, Colombina was exceedingly popular with crowds because, despite her circumstances, she was often quick-witted and able to handle herself in almost any situation she faced. The Colombina character is often depicted as being the target of a more socially powerful character like the brighella.

A doctor of medicine or the law, this character represents knowledge, learning, and the social establishment that arises from them. As such, he is often used as a critique of lawyers, doctors, the clergy, and those in charge of society. His knowledge, while vast, is often useless and his arrogance, often unending, is a source of comic relief in the play as he is either revealed to be woefully unskilled in the ways of the world or contemptuously ignorant of its ways.