the birth of venus – Sandro Botticelli, 1484

There exists no documentation on the origins or first owner of the Birth of Venus, which like Pallas and the Centaur was painted on canvas, highly unusual support at the time.

By the mid-16th century, Vasari mentions it as being, along with the Primavera, in the suburban villa of Castello, the former property of Giovanni di Pierfrancesco de Medici (died 1498)and of his brother Lorenzo (died 1503).

Although the traditional opinion that Botticelli’s two most famous allegories formed part of the same series is no longer accepted, also considering that the dimensions and techniques of the paintings are different, it is probable that the Venus, unlike the Primavera, hung from the beginning in the country villa of the two cousins of the Magnificent, having been commissioned by one of the two brothers.

The title by which the painting is universally known comes from the last century and is based on a faulty interpretation of the subject as Venus Anadiomene (“arising from the sea”), a subject made famous by the painter Apelles in antiquity.

In fact, Sandro Botticelli, inspired by the Metamorphosis of Ovid and perhaps by the verses of his friend Poliziano, is narrating a different episode from the legend of the Goddess: her arrival at the island of Kythera or perhaps Cyprus.

Against a seascape rendered with almost metaphysical synthesis and abstraction, Venus stands naked on a huge shell, being pushed towards shore by the swell of the sea, helped by the breath of the winds Zephyrus and Aura, who gently embrace as roses fall from the sky. 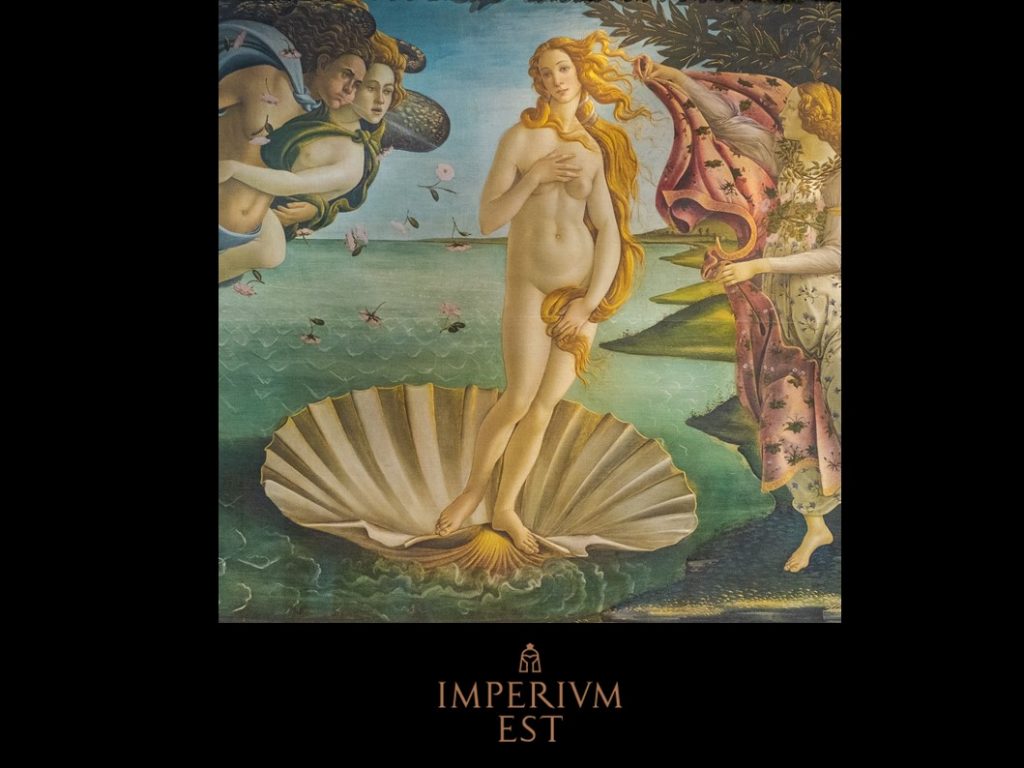 She is welcomed by a girl wearing a silken cloak embroidered with daisies and other flowers, probably one of the Hora, less likely one of the Three Graces.

While the two figures on the left may be taken from the famous Tazza Farnese, now in the Naples Archaeological Museum but then in the gem collection of Lorenzo the Magnificent, the pose of the main figure is inspired by the antique sculptural type, the Chaste Venus, well-known since Medieval times.

Regardless of its meaning this work, like the Primavera, is representative of the most serene and graceful phase of Botticelli’s art , clearly linked to the neo-Platonic atmosphere of Lorenzo’s age.

Once again complex philosophical ideas lie behind the meaning of the fusion of Spirit and Matter, the harmonious marriage of Idea and Nature, as explained by Ernst Gombrich.

Instead of the brilliant, solid colors used for the Primavera, it is painted with a mixture of diluted egg Yolk and light tempera.

Giving it extraordinary transparency similar to that of a fresco. The perfect beauty of Botticelli’s Venus is an icon of the time.