Symbolism and History of The Arch of Constantine in Rome

Spanning the Via Triumphalis in Rome, Italy, the city’s Arch of Constantine is as iconic and emblematic of Roman architecture as its larger neighbor, the Colosseum.

And like that famous landmark, the Arch of Constantine is one of many examples throughout Italia of the grand, epic scope of architecture in the empire as well as the later fusion of pagan and later elements.

Standing 20 meters high, 25 meters wide, and 7 meters deep, the arch is filled with statues and reliefs that reference both Constantine and his victory over Maxentius that ended the Tetrarchy as well as elements from earlier monuments to the emperors.

There are three primary openings on the arch with the largest measuring 12 meters high. Here is inscribed upon the marble panels flanking each side:

To the Emperor Caesar Flavius Constantinus, the Greatest,
pious, fortunate, the Senate and people of Rome,
by inspiration of divinity and his own great mind
with his righteous arms
on both the tyrant and his faction
in one instant in rightful
battle he avenged the republic,
dedicated this arch as a memorial to his military victory 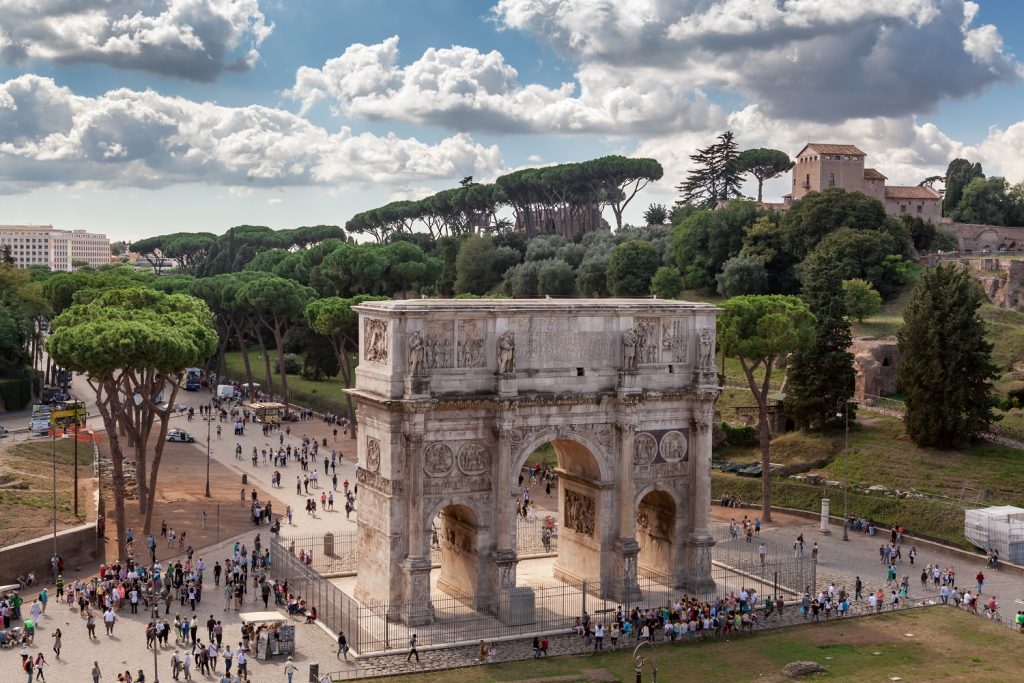 This victory is then depicted in a relief that shows Constantine’s troops overcoming Maxentius’ at the Battle of the Milvian Bridge. As we mentioned earlier, the arch borrows heavily from a range of styles and time periods though there are some central elements that remain standard on this and other arches.

This includes the Victoria/Nike figures, representative of victory, on the main arch itself. From here is where things become somewhat muddled and the arch’s true provenance becomes complex. Around the decorative columns, we see sculptures from the reign of Trajan (98-117 AD).

Moving from there, we note roundels from the reign of Hadrian (117-138 AD) and then capping this with three large panels from the reign of Marcus Aurelius (161-180 AD). This would make the earliest example well removed from the arch’s construction and dedication between 312 and 315 AD.

While earlier elements are intermeshed in with newer elements, there are distinct markers that separate the Constantine-era embellishments from the earlier examples. The most prominent example noticeable to visitors is the frieze above the three main portals.

The sculpture Sacrifice to Apollo, from the era of Hadrian, depicts figures in naturalistic/realistic proportions while the Constantine sculpture, Distribution of Largesse, is much more abstract.

Many historians note that the figures in the Constantine elements tend to be clearer in terms of conveying meaning even though their forms may be more abstract than earlier examples depict. Such an analysis makes sense given the arch’s primary objective was in conveying Constantine’s assumption of central power in a previously divided Rome.