The Clock Tower is one of the most famous architectural landmarks in Venice, standing over an arch that leads into what is the main shopping street of the city, the old Merceria. It marks both a juncture and a division between the various architectural components of St. Mark’s Square, which was not only the seat of political and religious power but also a public space and an area of economic activity, a zone that looked out towards the sea and also played a functional role as a hub for the entire layout of the city. In short, the Tower and its large Astronomical Clock, a masterpiece of technology and engineering, form an essential part of the very image of Venice.

For more than 500 years, they have measured out the flow of life and history within the city. As is known, the decision to erect a new public clock in the St. Mark’s area to replace the inadequate, old clock of Sant’Alipio on the north-west corner of the Basilica – which was by then going to rack and ruin – predates the decision as to where this new clock was to be placed.

It was 1493 when the Senate commissioned Zuan Carlo Rainieri of Reggio Emilia to create a new clock, but the decision that this was to be erected over “the entrance to the Merceria” only came two years later. According to Marin Sanudo, the following year “on 10 June work began on the demolition of the houses at the entrance to the Merceria (…) to lay down the foundations for the most excellent clock”.

The diarist would later record (1 February 1499) that the structure having been completed and the mechanism mounted “the clock on the Square was unveiled for the first time; above the street that leads into the Merceria, it is most beautiful and ingenious”. From the archway at ground level, the vertical structure rises on a rectangular base of around 9 x 6 metres through a quadruple series of scaled architectural orders to a terrace with the statues of the Moors.

At the time of its construction, it marked a clear break with the architectural language and layout of St. Mark’s Square, which was still substantially as it had been created in the time of Sebastiano Ziani (12th cent.); the appearance of that series of old porticoed structures is known to us from the account of them given in Gentile Bellini’s painting “The Procession of the Holy Cross“.

Following rulings handed down in 1500, and reiterated in 1503, the two side wings to the tower – culminating in two balustraded terraces – were built over the next five years. It should, however, be noted that it was not until after the fire of 1512 that plans got underway to rebuild the Vecchie Procuratie alongside (demolition of the existing structure started in February 1513). 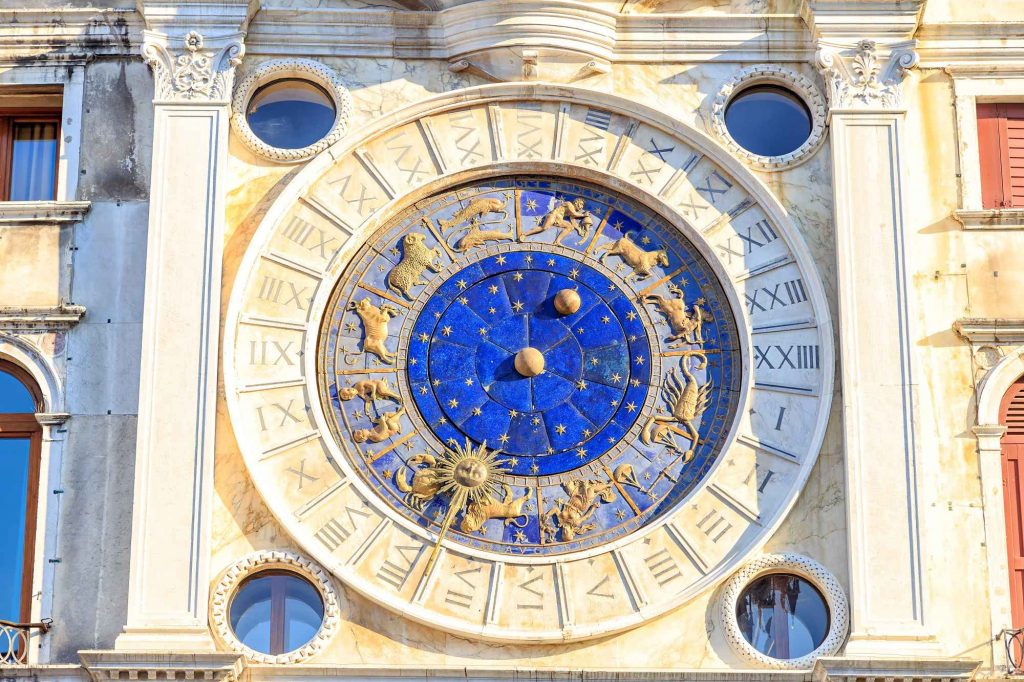 So, for more than a decade the Clock Tower stood alone, as a sort of manifesto of a short-lived local-bred school of humanist architecture (one can see it in this isolated state in a very atmospheric Carpaccio drawing, now in a private collection in Zurich). But the Tower was also to play a key role in the overall urban layout of the city, being an essential point of focus along the two main sight-lines of approach (along the Merceria or from St. Mark’s Square itself). From St. Mark’s it stands as a triumphal archway and monument marking access to the city’s main commercial artery; from the Merceria, it serves as a sort of telescope, offering a perceptive view that takes in the seats of political power and the city’s waterfront.

More or less convincing evidence has been brought forward to attribute the structure to Mauro Codussi. The design of the architectural orders is similar to that which can be seen in some of his other buildings; the same can also be said of the architectural nuances in design, and the sure way in which the ornamentation of the tower is subordinate to the structure as a whole (this decoration is particularly rich and perhaps eclectic, with various artists being involved in the production of the clock faces and the celebratory motifs included within the tower).

In the mid 18th century, Giorgio Massari raised the side wings above the terraces and added new balustrades; at the same time eight columns were added, reducing the light through the trabeation at ground level (this addition was almost certainly not the work of Tommaso Temanza, as is often claimed, but of a lesser-known architect, Andrea Camerata). However, neither of these changes could really disturb the power of the original design; though the whole was made rather heavier (above all, by the reiteration of the small paired windows and of the balustrade seen against the sky).

The work on the interior of the structure that was carried out in the 19th century (at the same time as that on the mechanism of the clock itself) was much more drastic: the wooden stairs were torn out and replaced with spiral staircases in metal, and the roofing of larch and lead sheeting was replaced with brick vaults and marble slabs (even the statues of the Moors were raised about a metre above their original.