With a name that itself defines the collection of deities making up a religious order, Rome, Italy’s Pantheon is an architectural wonder of the world that reminds us of the empire’s power, cultural influence, and vast wealth.

A tribute “to all gods,” the Pantheon’s massive structure was commissioned by the Hadrian in 126 AD as a replacement for an earlier structure built by Agrippa but later destroyed in a fire.

Evincing all of the classic hallmarks of architecture in Italia, the Pantheon’s height to its oculus and the diameter of the interior circle are equivalent at 43 meters or 142 ft, making the structure a study in proportionality and aesthetic composition.

Functioning as a basilica since 609 AD when the Byzantine Emperor Phocas gave the structure to Pope Boniface IV who immediately christened it the Basilica of St. Mary and the Martyrs, the structure is remarkably well preserved and suffered little of the vandalism and desecration that many Roman buildings faced in the immediate fall of the empire.

It is particularly noteworthy for being a pagan structure that was then converted into a Christian church – a fact that some believe led to its remarkable levels of preservation. But even with its hallowed status, the Pantheon did suffer some looting when Emperor Constans II of the Byzantine Empire visited Rome in 663, stripping the city of many of its metal sculptures and decor. 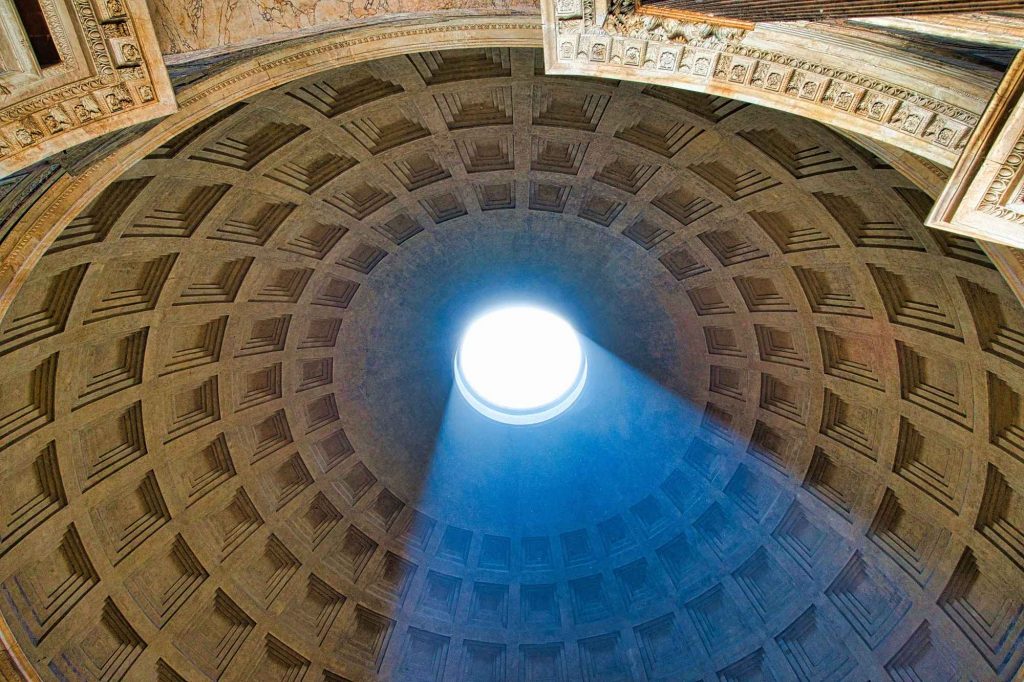 As far as the Pantheon was concerned, Constans II took the Pantheon’s bronze tiles and sent them back to Constantinople for likely use in construction projects there. Various marble sculptures, columns, and fittings have also been lost over time as the city of Rome itself has grown and changed around the Pantheon though, luckily, much of the interior marble and decor remains intact and hearkens back to Roman times.

Depicted in various works of art and itself home to works with the Annunciation by Melozzo da Forlì among its most well known. The Pantheon also acts as a tomb for the artists Raphael and Annibale Carracci as well as the composer Arcangelo Corelli, architect Baldassare Peruzzi, and two Italian kings, Vittorio Emanuele II and Umberto I.