a triumph of the Italian Renaissance

Michelangelo’s Moses has a complicated and difficult history. Like the ceiling of the Sistine Chapel, Pope Julius II commissioned Michelangelo to design and construct his tomb in 1505. Typical of renaissance era popes, this tomb was supposed to be an enormous structure mirroring Pope Julius’ larger than life personality and reputation.

The project, however, was interrupted many times. For four years, starting in 1508, Michelangelo was occupied with the daunting task of painting the ceiling of the Sistine Chapel.

After the death of the Pope, the scale of the tomb was greatly reduced.

It would become a smaller, two-tiered monument with a few smaller statues, columns, centered around a figure of Moses in the church of St. Pietro in Vincoli.

For Michelangelo, this marked an important creation in his career; this tomb would be his first architectural project. Combining architecture and sculpture it would also take cues from his painting. After he completed the ceiling of the Sistine Chapel, Michelangelo got back to work on the tomb in 1513.

Legend has it that Michelangelo was so into the statue that he threw his hammer at it saying: “Moses, why don’t you speak?” 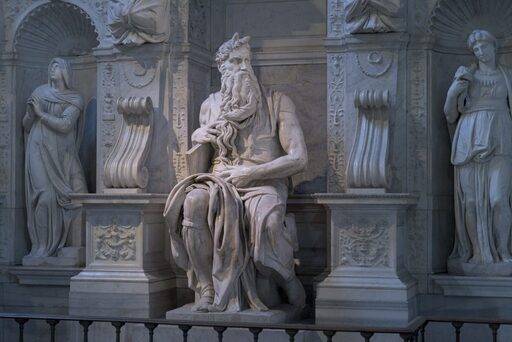