Few names are as synonymous with the art of Italy and the Renaissance as Michelangelo and his The Last Judgment fresco for the altar wall in the Sistine Chapel embodies his style and the era’s approach to art. Not without its own controversies, The Last Judgment was commissioned under Pope Clement VII 25 years after the painting of the Sistine Chapel ceiling and completed under Pope Paul III in 1541.

Because of this, The Last Judgment is often compared with Michelangelo’s other works throughout Italia, including the aforementioned Sistine Chapel ceiling, in order to trace the evolution of his style and form throughout the years as the altar was complete when the artist was 67 years of age.

Further, The Last Judgment is notable for the shift in outlook between the two popes under which Michelangelo worked with the latter, Paul III, having more reformist leanings when compared with Clement VII’s traditionalism.

As for the theme of the painting itself, the last judgment is itself nothing new in Renaissance art and is considered by some to be the quintessential subject matter during that period. Concerned with death, judgment, and the ensuing afterlife, the painting shows a triumphant Christ flanked by a subservient Virgin Mary looking down upon the saved souls while the damned are siphoned off on the opposite side. 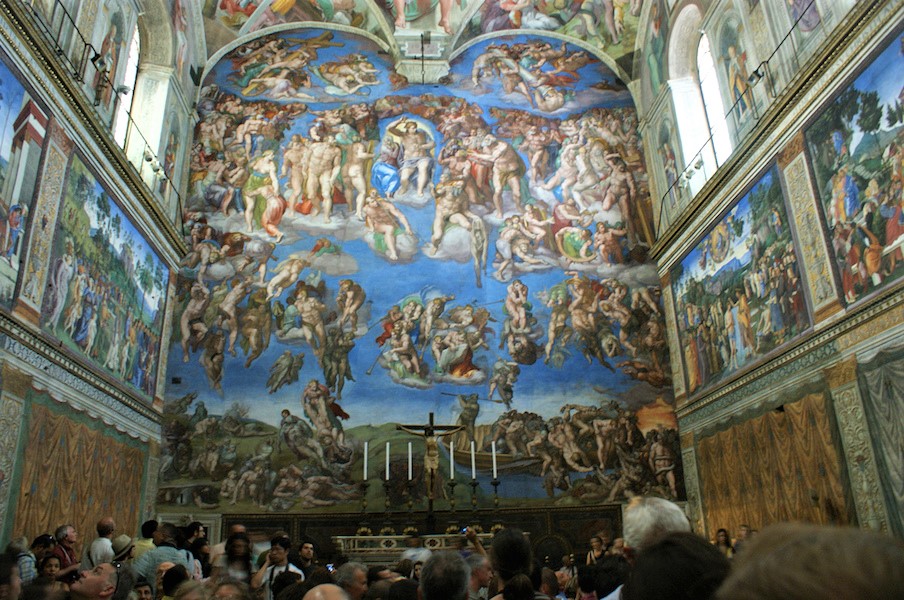 Of equal size to the central Christ are Saint John the Baptist and then Saint Peter who is holding the keys to heaven.

Interestingly, the bottom portion of the fresco depicts the mythical figure of Charon who, in this case, is taking the souls of the damned down into hell.

With over 300 figures in the painting, there are more than enough items to comment upon or speculate as to their representation but the artistic depiction of Saint Bartholomew is particularly interesting for both its macabre nature as well as its alleged portrayal of a 67-year-old Michelangelo.

Flayed for his faith, Bartholomew is showing holding a knife in one hand and his skin in the other. Because of the shifting tides during Paul III’s papacy, there were notable controversies surrounding Michelangelo’s work in light of the Protestant reformation.

Namely, the use of mythological figures and the nudity in the fresco caused some ire with the public.

Of course, Michelangelo was no stranger to this kind of attention and even went so far as to depict Paul III’s Master of Ceremonies, Biagio da Cesena (shown as Minos), as a denizen of hell at the fresco’s unveiling.