One of the most recognizable works of art in the entire world, Michelangelo’s David Statue is as emblematic of Florence and the Italian Renaissance as it is of sculpture itself. Crafted in the ideal male physique of the classic Greek and Roman world, the David Statue represents a lifetime of mastery on the part of Michelangelo and the creative spirit of his age.

While you may know that the David Statue is famous, you might not know why it is such a powerful example of Florence’s Italian Renaissance period and remains a draw for art connoisseurs and tourists today.

A fourteen-foot tall statue crafted between 1501 and 1504, what we know and recognize as Michelangelo’s David Statue is actually the largest example of that work and, as such, one in a long line of such statues from Michelangelo.

Initially commissioned by the Opera del Duomo for the Cathedral of Florence, Michelangelo was first tasked with completing work by Agostino di Duccio and Antonio Rossellino to craft statues for the niches in the Florentine landmark. 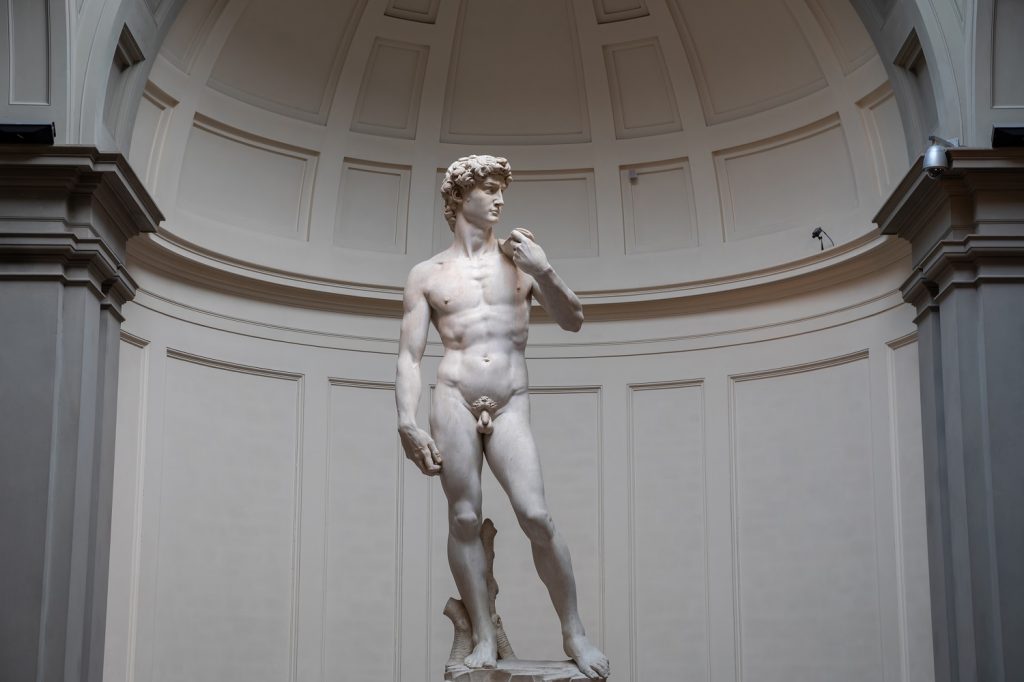 One large piece of marble left over for 25 years by the previous sculptors, and rejected because of its imperfections and subsequent questions over its stability, would later become the canvas out of which Michelangelo would craft the David while working in secret. Naturally, this would be a massive accomplishment for the young artist.

Though only 26 years of age, Michelangelo was well-known throughout Italy for his abilities and this radical take on the David and Goliath story established him as an avant-garde force.

Unlike previous artists who relished in David’s victory over the giant, Michelangelo chose to depict David poised to hurl the stone that would fell his enemy. This gives the statue a taut, athletic presence that is reminiscent of the statues of antiquity that celebrated athleticism.

Rather than acting as a metaphor for victory and overcoming great odds, Michelangelo’s interpretation veers towards the heroic, daring, and even dangerous. The viewer is reminded of the great odds on the line for David in his battle against the giant and that he is just a mortal.

Traditionally understood as the fulfillment of God’s promise to those who keep the faith, the David Statue’s place in the narrative timeline makes it a symbol of faith itself: A plunge into the unknown for a human who, no matter how prepared or ideal he may be, is making a wager with his very life.

Upon completion, nine different sites for the David were offered but the Piazza della Signoria, the heart of Florentine power, won the honor of housing the David initially.