Michelangelo – The Lunettes and The Spandrels

1) the ceiling is really high up, and

2) there are a lot of paintings up there.

Because of this, the centuries have handed down to us an image of Michelangelo lying on his back, wiping sweat and plaster from his eyes as he toiled away year after year, suspended hundreds of feet in the air, begrudgingly completing a commission that he never
wanted to accept in the first place.

Fortunately for Michelangelo, this is probably not true. But that does nothing to lessen the fact that the frescoes, which take up the entirety of the vault, are among the most important paintings in the world.

Michelangelo began to work on the frescoes for Pope Julius II in 1508, replacing a blue ceiling dotted with stars. Originally, the pope asked Michelangelo to paint the ceiling with a geometric ornament, and place the twelve apostles in spandrels around the decoration.

Michelangelo proposed instead to paint the Old Testament scenes now found on the vault,
divided by the fictive architecture that he uses to organize the composition.

The subject of the frescoes

The narrative begins at the altar and is divided into three sections. In the first three paintings, Michelangelo tells the story of The Creation of the Heavens and Earth; this is followed by The Creation of Adam and Eve and the Expulsion from the Garden of Eden; finally, is the story of Noah and the Great Flood.

Ignudi, or nude youths, sit in fictive architecture around these frescoes, and they are accompanied by prophets and sibyls (ancient seers who, according to tradition, foretold the coming of Christ) in the spandrels.

In the four corners of the room, in the pendentives, one finds scenes depicting the Salvation of Israel. 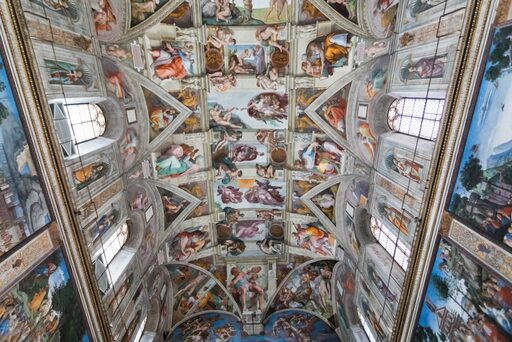 Although the most famous of these frescoes is without a doubt, The Creation of Adam, reproductions of which have become ubiquitous in modern culture for its dramatic positioning of the two monumental figures reaching towards each other, not all of the
frescoes are painted in this style. In fact, the first frescoes Michelangelo painted contain multiple figures, much smaller in size, engaged in complex narratives.

This can best be exemplified by his painting of The Deluge. In this fresco, Michelangelo has used the physical space of the water and the sky to separate four distinct parts of the narrative. On the right side of the painting, a cluster of people seeks sanctuary from the rain under a makeshift shelter. On the left, even more, people climb up the side of a mountain to escape the rising water. Centrally, a small boat is about to capsize because of the unending downpour. And in the background, a team of men work on building the arc—the only hope of salvation.

Up close, this painting confronts the viewer with the desperation of those about to perish in the flood and makes one question God’s justice in wiping out the entire population of the earth, save Noah and his family, because of the sins of the wicked. Unfortunately, from the floor of the chapel, the use of small, tightly grouped figures undermines the emotional content and makes the story harder to follow.

A shift in style

In 1510, Michelangelo took a yearlong break from painting the Sistine Chapel. The frescoes painted after this break are characteristically different from the ones he painted before it, and are emblematic of what we think of when we envision the Sistine Chapel paintings.

These are the paintings, like The Creation of Adam, where the narratives have been pared down to only the essential figures depicted on a monumental scale. Because of these changes, Michelangelo is able to convey a strong sense of emotionality that can be
perceived from the floor of the chapel.

Indeed, the imposing figure of God in the three frescoes illustrating the separation of darkness from light and the creation of the heavens and the earth radiates power throughout his body, and his dramatic gesticulations help to tell the story of Genesis without the addition of extraneous detail.

This new monumentality can also be felt in the figures of the sibyls and prophets in the spandrels surrounding the vault, which some believe are all based on the Belvedere Torso, an ancient sculpture that was then, and remains, in the Vatican’s collection. One of the most celebrated of these figures is the Delphic Sibyl (left).

The overall circular composition of the body, which echoes the contours of her fictive architectural setting, adds to the sense of the sculptural weight of the figure. Her arms are powerful, the heft of her body imposing, and both her left elbow and knee come into the viewer’s space. At the same time, Michelangelo imbued the Delphic Sibyl with grace and harmony of proportion, and her watchful expression, as well as the position of the left arm and right hand, is reminiscent of the artist’s David.

The lunettes and the spandrels are architectural elements which connect the vault to the walls over the windows. We cannot ascertain it they were already decorated when Michelangelo began his project as there is no evidence of their designs in the project
showing the earlier decoration of the vault with the starry sky.

Michelangelo frescoed the Creation of Eve in a significant position in the center of the vault, directly above the railing which, at that time, divided the Chapel into two almost equal parts. Following the reading order of the scenes of Genesis (the reverse order of the painted sequence), the Creation of Eve’s central position above the entrance to the altar area can we interpreted as Eve as a prefiguration of Mary, who would, in her turn, come to represent the Mother of the Church in Christian theology.

This interpretation is confirmed by the presence of the prophet Ezekiel and the Cumaean Sibyl on either side of the scene. Ezekiel’s prophesies included the birth of the Virgin and the construction of a new temple, in which the Eternal would return. The presence of the Cumaean Sibyl is just as meaningful, as she owed her fame in the Latin Christian world to the Eclogue IV by Virgil, in which she recounts a prophecy. According to this prophesy a baby boy born of a virgin under the reign of Augustus would we destined to substantially change the course of history and inaugurate a new golden age :”Ultima Cumael venit iam carminnis aetas;/magnus ab integro saeclorum nascitur ordo;/iam redil et Virgo,redeunt Saturnia regna / iam nova progenies caelo demittitur alto “ .  “The last era Of Cumaen song is now arrived;/the great series of ages begins anew. /Now, too, the Virgin Astrea returns, the reign of Saturn returns;/now a new progeny is sent down from high heaven.

These worlds resulted in the idea that the whole of antiquity had to be seen as a preparative the period leading up to the good news, along with the conviction that, although God had shown himself in a more direct way through the prophets of the Old Testament, at least some fragments of the Revelation were also transmitted to the pagan world through the Sibyls. The concept was widespread during the Renaissance and linked to an attempt to the classic culture to Christian doctrine.