Jojoba (pronounced ho-ho-ba) oil is a vegetable oil obtained from the crushed bean of the jojoba shrub (Simmondsia Chinensis ). The jojoba shrub is native to the Sonoran Desert of northwestern Mexico and neighboring regions in Arizona and southern California. It grows in dense stands throughout that region.

The woody evergreen shrub may reach 15 ft (4.5 m) in height. Jojoba has flat gray-green leathery leaves and a deep root system that make it well adapted to desert heat and drought.

It has a life span of 100–200 years, depending on environmental conditions. Jojoba grows best in areas with 10–18 in (25–45 cm) of annual rainfall where temperatures seldom fall below 25°F (-4°C) for more than a few hours at night. It can grow on many types of soils, including porous rocks, in slightly acid to alkaline soils, and on mountain slopes or in valleys.

Jojoba shrubs are dioecious, meaning plants are either male (staminate), producing pollen, or female (pistillate), producing flowers. The small flowers have no odor or petals and do not attract pollinating insects.

The flowers are pollinated by the wind in late March; the flowers develop into fruit by August, with full maturation occurring by October. The green fruit dries in the desert heat, its outer skin shriveling and pulling back to expose a wrinkled brown soft-skinned seed (referred to as a nut or bean) the size of a small olive.

These nuts, which resemble coffee beans, contain a vegetable oil that is clear and odorless but less oily to the touch than traditional edible oils. The oil comprises half of the weight of the nut. There are about 1,700 seeds in a pound; 17 lb (6.3 kg) of jojoba seeds are required to produce one gallon of oil. 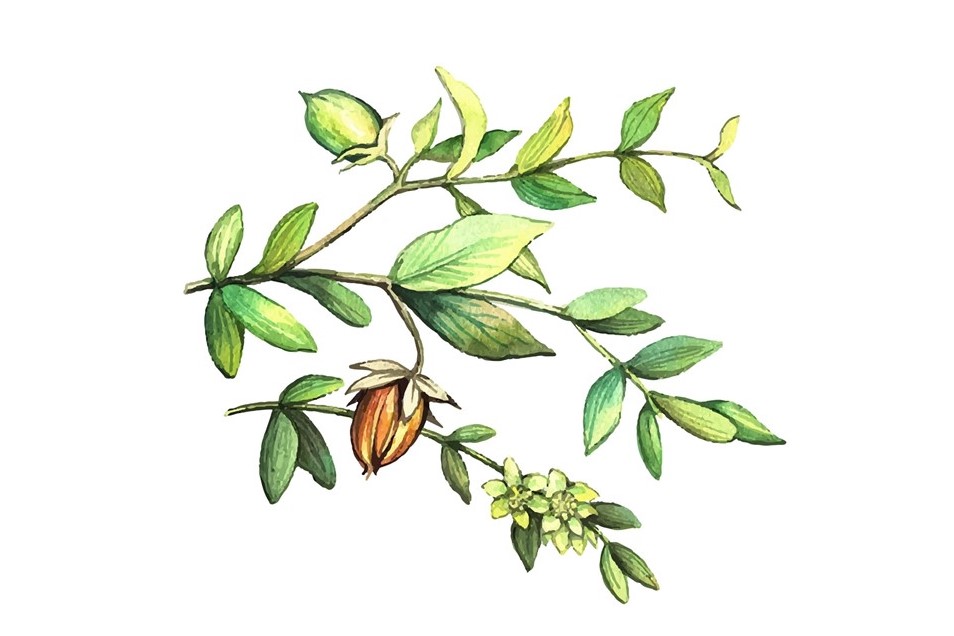 Native Americans have used jojoba for hundreds of years. In the 1700s, Father Junipero Serra, the founder of 21 California missions, noted in his diary that the Native Americans were using the oil and the seeds for many different purposes: for treating sores, cuts, bruises, and burns; as a diet supplement and as an appetite suppressant when food was not available; as a skin conditioner, for soothing windburn and sunburn; as cooking oil; as a hair or scalp treatment and hair restorative; and as a coffee-like beverage by roasting the seeds.

The chemical structure of jojoba oil is different from that of other vegetable oils. Rather than being an oil, it is actually a polyunsaturated liquid wax that is similar to sperm whale oil, though without the fishy odor.

It is made of fatty acids as well as esters composed entirely of straight-chain alcohols. Both the acid and alcohol portions of jojoba oil have 20 or 22 carbon atoms, and each has one unsaturated bond. Waxes of this type are difficult to synthesize. As a wax, jojoba oil is especially useful for applications that require moisture control, protection, and emollients.

Jojoba oil is liquid at room temperature because of its unsaturated fatty acids. It does not oxidize or become rancid and does not break down under high temperatures and pressures. Jojoba oil can be heated to 370°F (188°C) for 96 hours without exhibiting degradation in general composition and carbon chain length. The stability shown by jojoba oil makes it especially useful for cosmetic applications.

When the USA banned the use of sperm whale oil (spermaceti wax) in 1974, the government began to fund efforts to investigate and cultivate jojoba as a replacement. Jojoba oil was found to be an adequate substitute for applications that had previously used sperm whale oil.

The first commercial cultivation of jojoba was in the Negev Desert and Dead Sea areas of Israel, but by 1977, domestic cultivation had begun in the USA. In 2000, the International Jojoba Export Council expected the global jojoba production to increase 15% over a five-year period.

Jojoba oil has many uses in a wide variety of industries. As a cosmetic, it is an effective cleanser, conditioner, moisturizer, and softener for the skin and hair. It is applied directly to the skin to soften the skin, to reduce wrinkles and stretch marks, to lighten and help heal scars, and to promote a healthy scalp and hair.

Jojoba oil is similar to, and miscible with, sebum, which is secreted by human sebaceous glands to lubricate and protect skin and hair. When sebum production decreases due to age, pollutants, or environmental stresses, jojoba oil can be used to replicate sebum oil.

Jojoba oil can accumulate around hair roots, thereby conditioning hair and preventing it from becoming brittle and dull. If there is too much sebum buildup on the scalp, it dissolves and removes the sebum, leaving the hair clean. Jojoba oil as a solubilizing agent can also remove sticky buildup on hair from hair preparations as well as airborne particulates deposited on the hair.

It forms a lipid layer on the skin, acting as a moisturizer, as well as penetrating and being absorbed by the outer layer of skin. It is widely used as an ingredient in shampoos, conditioners, facial, hand and body lotions, cuticle and nail care products, baby care lotions, creams and oils, cleansers, moisturizers, bath oils and soaps, sunscreen lotions, and makeup products. Jojoba oil is also used as a base in the manufacture of perfume.

Jojoba benefits for the hair:

Jojoba oil can be used as a conditioner for dry and frizzy hair, replenishing moisture and improving texture.
Its antibacterial and anti-inflammatory properties help to maintain a healthy clean scalp.
Jojoba oil locks in the moisture in the hair shaft, giving dull hair shine and texture.
Jojoba oil stimulates hair growth by nourishing the hair follicles with essential ingredients.

Jojoba oil benefits for the skin:

Jojoba oil can be used as a face and body moisturizer.
It is a great and natural make-up remover and face cleanser.
Jojoba oil can be used as a non-irritating shaving oil for men and women.
It is safe to use for children and babies.
Jojoba oil has anti-aging properties. It helps to soothe fine lines and wrinkles and evens out the skin tone.
Due to its antibacterial and anti-inflammatory properties, Jojoba oil is used to treat sunburns, acne, psoriasis, eczema and dermatitis.