Standing tall in the Piazza Navona is a monument to the Eternal City itself and Rome’s cultural influence on the world. Embodied in sculptures anchored by an Egyptian obelisk, La Fontana dei Quattro Fiumi or the Four Rivers Fountain has brought life-giving water in its current to the citizens of Rome in its current incarnation since 1651.

Planned by Pope Innocent X as a way to bring culture and splendor to the Piazza Navona, the fountain was not without its opposition in the beginning. Starting construction in the middle of the intense famine of 1646-1648, the citizens of Rome opposed the construction of the fountain with pasquinade writers proclaiming “We do not want Obelisks and Fountains, it is bread that we want. Bread, Bread, Bread!”

The most expensive of the various submissions sent to the pope, Bernini’s Four Rivers Fountain is said to not only have wowed the papal court with its majesty but also catapulted the architect back into the Holy See’s good graces.

Rising 50 meters in height, the obelisk and its base of travertine rock surmounted by four river gods combine the pagan and Catholic Rome in interesting and novel ways.

Characteristic of the baroque art style employed in the fountain, each statue and accompaniments have a kind of theatrical and dramatic quality to their movements. 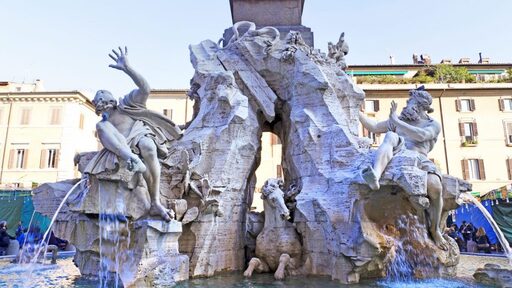 They are given a pagan rendition in an expression of the perceived universality of the Catholic message as shown in the four river gods flanking an obelisk seemingly suspended in the air.

Representing Rome’s message reaching the continents of Asia, Africa, Europa, and South America, respectively, the four river gods were each designed by a different sculptor who attempted to evoke in stone the symbolic nature of each body of water.

Seen pointing towards the Pamphili coat of arms comprised of three fleur-de-lis and a dove holding a twig, the sculpture representing the Danube both references Pope Innocent’s family as well as the Danube’s geographic proximity to Rome itself.

This is denoted by the papal tiara and keys of Saint Peter encircling the Pamphili crest itself.

Brought to life by master artist Antonio Raggi, one of Bernini’s many disciples and often noted as his closest in personal terms, the river god is flanked by a horse connecting the Danube sculpture with the Rio de la Plata one by Francesco Barrata.

Initially criticized for what some perceive as a lack of cohesion in the design, the fountain is now recognized as an artistic summation of Rome’s might cultural achievements over time from the pagan era to the Catholic baroque.