A massive painting that is often noted for its unabashed display of beauty and grandeur, the Birth of Venus by Sandro Botticelli tells us as much about Renaissance paintings and their advancement over time as it does the mythical goddess herself. A stylized depiction of Venus rendered on a massive canvas, the painting is notable for that very fact.

While many artists preferred to work with wood at this time, Botticelli’s use of tempera on canvas signaled a new age in the production and display of art. Popular because it adapted well to high humidity climates like that found in Venice, canvas also avoided the problem of warping so often associated with wood.

Because of this pioneering decision on the part of Sandro Botticelli, we not only get to enjoy the Birth of Venus in much the same condition it was when it was brand new, but also we can enjoy a slew of other Renaissance paintings that followed his lead and chose the now somewhat standard canvas over wood.

It is thought that the work was completed in the 1480s and was commissioned by an unknown Medici patron. Often discussed alongside Botticelli’s sister work the Primavera, the Birth of Venus tends to be the more well-known of his paintings and tends to be a favorite due to its straightforward, unabashed nature. 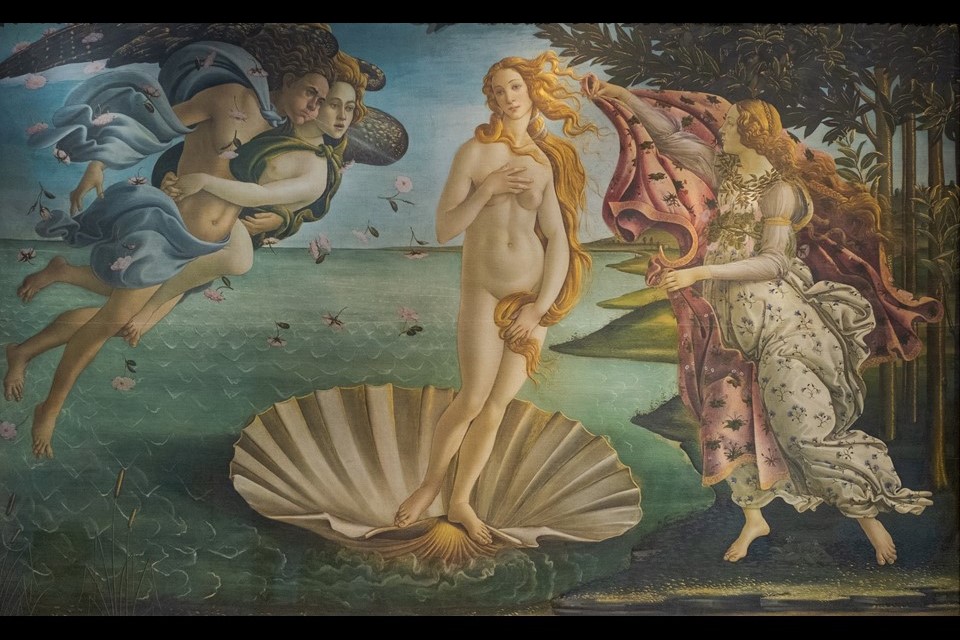 Derived from the tales of the poet Homer, the painting displays Venus’ emergence of Cythera accompanied by the Zephyrus and Cloris who blows the wind carrying her to shore.

On the shore, Venus is awaited by the Goddess of Spring, Pomona. Depicted as an idealized female form from his time, Botticelli’s Venus exhibits the hairstyling popular during that period as well as a particularly perfect complexion for the figure of Venus herself.

As for the pose in the picture itself, it is believed to reference the Aphrodite of Cnidos statue wherein the goddess is covering herself out of modesty while looking to the side.

Though Aphrodite’s face is turned away from the viewer, Venus is only looking askance. It is believed that the Aphrodite statue inspired the Birth of Venus because the depiction of the nude female form was quite rare during works of art at this time thus Botticelli’s use of an older example in his work.

Unlike many paintings of the Renaissance that played with perspective, the head-on style used in Birth of Venus intentionally draws the viewer’s eye to the physical form on display. The contrast between the background’s details and coloring with that of Venus herself further highlights that she is the focal point of the picture.