A landmark in a city filled with architectural wonders of the world, the Vatican stands out among the Eternal City’s attractions as the palace of the popes as well as a showcase of Renaissance architecture.

In particular, St. Peter’s Basilica, itself host to millions of visitors every year, is a stunning example of the merger of the classical world’s forms with the Renaissance’s ideas about humanity.

Initially designed by Donato Bramante in the shape of a Greek cross, the structure would later pass through the hands of several geniuses who have collectively contributed to what we know today.

The largest church in the Christian world until the completion of a chapel in Côte d’Ivoire in 1989, St. Peter’s Basilica is one of the many symbols of the influence, tradition, and grandeur of post-Imperial Rome.

Born in 1444 in Monte Asdrualdo in the then Duchy of Urbino, Donato Bramante worked on such notable landmarks as the cathedral of Santa Maria delle Grazie before his commission in Rome.

He was not only influential in the construction of the Vatican itself but was also commissioned by Pope Julius II to help with the revitalization of greater Rome itself – a massive undertaking from almost every perspective. 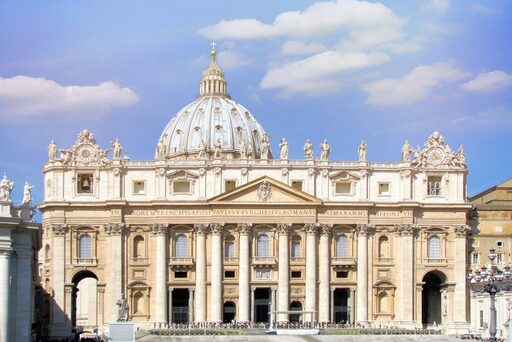 Work on St. Peter’s Basilica itself began in 1506 and extended well beyond both Bramante and Pope Julius II’s lives (the first dying in 1514 and the latter in 1513). Bramante’s original vision for the structure incorporated what were widely understood to be classical forms particularly those inspired by Greece.

Yet there were hints in terms of structure and outlay that hearkened back to imperial Rome’s palaces and even the Colosseum. Nonetheless, Pope Julius II’s death and then Bramante’s a year later had a cooling effect on enthusiasm for the plan, and a later lack of coherence is evidence of this as well as the many ad hoc changes applied to the original concept in the wake of his passing.

One notable change that Bramante’s successors Raphael, Fra Giovanni Giocondo, and Giuliano da Sangallo made included transforming the Greek cross layout into that of a Latin cross.

This was the form it was to maintain through successive teams of architects and designers that worked on the massive St. Peter’s Basilica after Bramante’s death.

Carlo Maderno’s plan was selected by Pope Paul V. The iconic elliptical piazza often associated with the Vatican was designed by Gian Lorenzo Bernini in 1637.