An Overview of the Types of Venetian Carnival Masks

The Carnival of Venice is one of Europe’s oldest and most well-known traditions.

Venetian masks, associated with the carnival and the city alike, are iconic representations of this event that now draws tourists from all over the globe.

While most of us can appreciate the craftsmanship and interesting styling choices that go into the masks you find in Venice, Italy, few of us actually known anything about what the masks are about.

You may know that they were worn to conceal someone’s identity from others, and you might even know that some of them are specific to certain classes.

But did you know that some of them represent popular concepts from the stage and even mythology?

Here are the various types of Venetian masks and what each one symbolizes in a historical context. 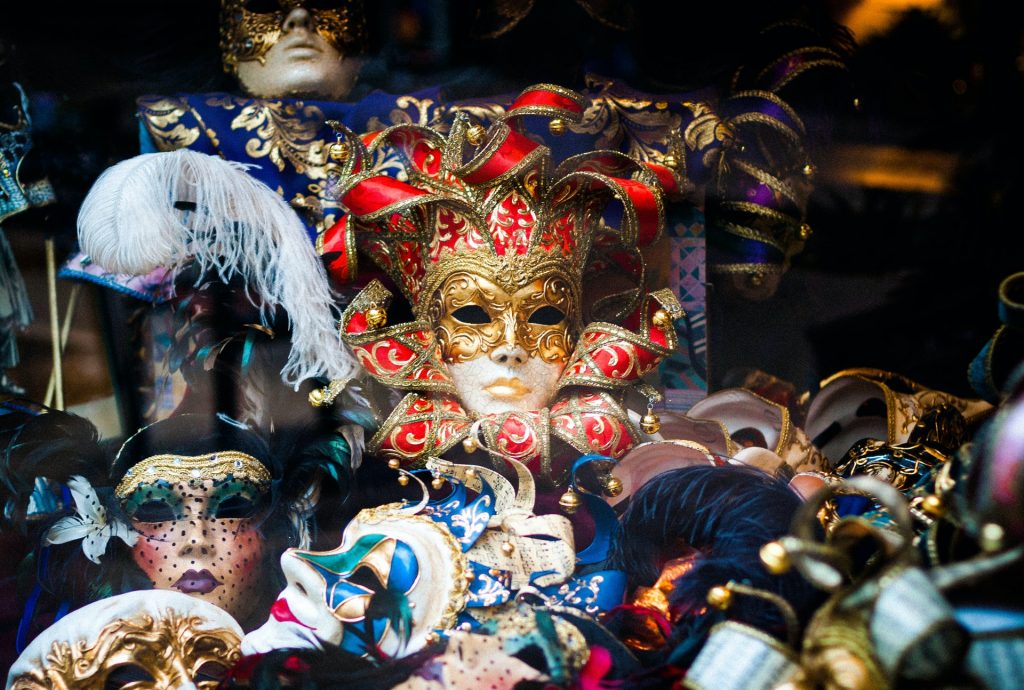 Let’s start with the quintessential carnival mask: The bauta. This face covering features elongated, exaggerated features in start all white with a contrasting black tricorn hat. Worn by the aristocracy, the bauta still commands respect and comports an air of dignity to the wearer. Carnival goers that want to be true to tradition would do well choosing a bauta mask. In fact, in the 18th century, the bauta became necessary to wear when attending political meetings in Venice.

Another iconic mask associated with the Carnival season is the plague doctor’s mask. This bird-like mask features a long beak with wide, circular eyes. Typically worn with a wide-brimmed, black hat as well as a black cloak with white gloves, the costume is reminiscent of the plague doctor’s uniform from the era of the Black Death. Afraid to touch the sick or even inhale the same air as them, the plague doctor mask beak was often stuffed with sweet-smelling herbs and flowers as a ward against the disease.

Worn only by women, the strapless black mask known as the moretta is held on the wearer’s face via a button that the person bites and holds. Unable to speak without removing the mask, the moretta only partially concealed the wearer’s identity.

The cat-like mask associated with the Venetian Carnival is historically linked to men that wanted to dress up as women during the season. The gnaga, as with many of the carnival conventions, subverted the traditional rules of society and allowed men to “act” as women for their male counterparts while wearing the mask.

Often seen as part of kitsch decor, the half-face Colombina comes from the servant girl character of the same name found in the play Commedia dell’arte. This servant style is also known as the arlecchina.

The male counterpart to the arlecchina, this short-nosed, wide-eyed mask is often associated with the comic servant or, to put it in modern terms, the comic relief of the play.

This beak-nosed mask is often worn with white, frumpy clothing and straggly hair. Often associated with the drunkard in Italian plays.

Another beak-nosed mask but with heavy, weighty eyebrows, this mask is often associated with fine living but also a miserly approach to life. The pantalone is often the butt of jokes that mock these qualities.

The iconic sad clown that pines for the heroine Colombina, this concept has actually transcended Venice and has currency in French culture as well.