A little history of the Basilica of St. Mark

Originally this building was to be an extension of the Doge’s Palace, however the construction of the Basilica of St. Mark, which began in 828 and ended in 832, was made to house the body of St. Mark the Apostle brought from Alexandria to who they named protector of the city. This was a fundamental fact for Venice to be constituted as an independent episcopal seat.

The works of the present basilica began in 1063 in Byzantine style to represent the power of the prosperous Venetian Republic. This basilica was built respecting the model of two basilicas of the ancient imperial city of Byzantium with a central plant in the shape of a Greek cross, with five large domes and a particular mixture of ancient and oriental art.

Over time, the Basilica underwent several modifications, especially as regards of decoration, pointed Gothic arches, Sant’Alipio arch, 17th and 18th century sculptures and mosaics of the main façade, bas-reliefs that represent the professions and zodiac signs of the central gate,

the marbles that come from the East, the porphyry figures of the Tetrarchs and the horses of St. Mark. The result is a stunning and beautiful blend of styles.

The basilica as we know it today, even though it was modify, has a Greek cross base with five domes. It became the cathedral of the city in 1807 and has more than 4,000 square meters of mosaics, many of them belonging to the 13th century, also has 500 columns of the 3rd century.

What is the Basilica of St. Mark today?

The Basilica of San Marco is now and has always been the center of public and religious life in Venice. Today, this basilica welcomes hundreds of thousands of visitors every year.

This basilica has a very special historical interest since it was here where the Dukes of Venice were consecrated. 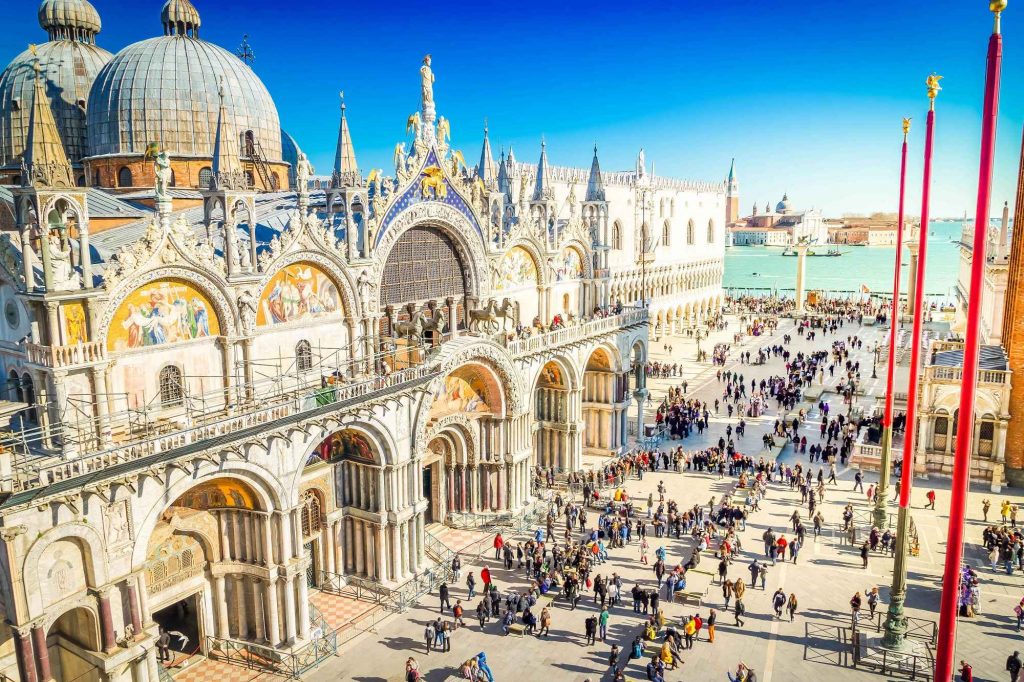 I. The gold pieces of the mosaics inside St. Mark’s Basilica are made with REAL gold!

Venice was in the past a very wealthy city of merchants: what the Republic lacked in military strength or in land domination, they had in riches. The basilica’s mosaics are not just a way to please God and St. Mark or to communicate complex religious concepts, they were also a way to show the wealth of the city to the important guests, like kings or ambassadors from other coutries.

The golden pieces are actually made of gold: each one has a thin gold leaf ‘sandwiched’ between two layers of clear glass. With such a display of precious material, the Venetians could show at the same time their grand devotion but also their political ‘weight’: an extremely important thing for such a small country.

II. The big outer domes above the basilica are actually fake!

In Venice it’s impossible to build huge structures: the terrain is frail, so you have to carefully stick to small, light and flexible buildings.

But the Venetians had to find a way to astonish their guests: so they optimized some very clever tricks to cheat the eye and give everyone the impression that the buildings are huge and imposing.

In St. Mark’s Basilica there is a great example of this: the five big domes that give the building its distinctive shape are just a superstructure made of wood cover with a thin layer of lead.

They are actually completely empty: the brick built domes with the mosaics that you see inside the church are much lower.